Looking for Duolingo questions, If you are an English language trainer, you probably know Duolingo. The company has launched its English proficiency test in 2017. Duolingo English test is around for three years now, but because of the ongoing COVID 19 pandemic, its demand has increased significantly. The test is now accepted by hundreds of Universities around the world. The main upside of this test is that you can take the test from the comfort of your home anytime. The student doesn’t need to book a test for a specific date. It costs only 49$, which is very cheap as compared to other proficiency tests.

Things to Know about the DET and Duolingo questions

Test takers can only take the test alone in a quiet environment.  The Duolingo English Test can be taken in the Chrome and Opera browsers worldwide. In China, the test can be taken on the 360 and QQ browsers as well. An internet connection with at least 2 Mbps download speed and 1 Mbps upload speed is recommended for test sessions.

Before the test starts, there is an onboarding process, it checks takers computer’s microphone and speaker. During this process, the identification of the test taker is validated and the taker is informed about test rules.

There are rules for the test takers’ internet browsers. The browsers are locked down after onboarding, which means that any navigation away from the browser window will invalidate the test session. Any browser extension or plugin should also be disabled. Apart from all the above rules, the test has to abide by the rules below too:

The test has seven different item types, which collectively tap into test-takers’ reading, writing, listening, and speaking abilities. Because the Duolingo English Test is a CAT, it will adjust in difficulty as the computer updates its real-time estimate of test-takers’ language proficiency as they progress through the test. There are five item types in the computer-adaptive portion of the test. The CAT item types include c-test, audio yes/no vocabulary, visual yes/no vocabulary, dictation, and elicited imitation. During each administration of the Duolingo English Test, a test taker will see at minimum three of each CAT item type and a maximum of seven of each CAT item type. The median rate of occurrence of the CAT item types across all administrations is six times per test administration. Additionally, test takers respond to four writing prompts and three speaking prompts. They are not a part of the computer-adaptive portion of the test.

However, the writing and speaking prompt also vary in difficulty, and their selection is based on the CAT’s estimate of test-taker ability. These items work together to measure test takers’ English language proficiency in reading, writing, listening and speaking.

This is a variant of the “yes/no” vocabulary test. The test taker is presented with a set of English words mixed with pseudo-words that are designed to appear English-like and must discriminate between them. Such tests have been used to assess vocabulary knowledge at various CEFR levels, and have been shown to predict language proficiency skills—the text version predicts listening, reading, and writing abilities; while the audio version predicts listening and speaking abilities in particular. These tests typically show a large set of stimuli (e.g., 60 words and 40 pseudo-words) of mixed difficulty at once. The format is made computer-adaptive by successively presenting multiple sets (items/testlets), each containing a few stimuli of the same difficulty.

In this exercise, the test taker listens to a spoken sentence or short passage and then transcribes it using the computer keyboard. The test takers have one minute in total to listen to and transcribe what they heard. They can play the passage up to three times. This assesses the test taker’s ability to recognize individual words and to hold them in memory long enough to accurately reproduce them; both are critical for spoken language understanding. Dictation tasks have also been found to be associated with language learner intelligibility in speech production. 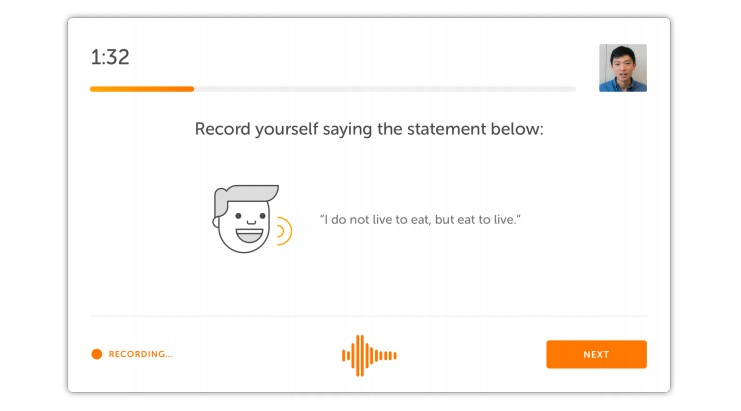 The read-aloud variation of the elicited imitation task is a measure of test-taker reading and speaking abilities. It requires the test takers to read, understand, and speak a sentence. Test takers respond to this task by using the computer’s microphone to record themselves speaking a written sentence. The goal of this task is to evaluate intelligible speech production, which is affected by segmental/phonemic and suprasegmental properties like intonation, rhythm, and stress. Furthermore, intelligibility is correlated with overall spoken comprehensibility, meaning that this item format can capture aspects of speaking proficiency. We use state-of-the-art speech technologies to extract features of spoken language, such as acoustic and fluency features that predict these properties (in addition to basic automatic speech recognition), thus evaluating the general clarity of speech.

The extended speaking tasks are measures of test taker English speaking abilities. At the end of the CAT portion of the test, the test takers respond to four speaking prompts one picture description task and three independent speaking tasks, two with a written prompt and one with an aural prompt. Each of the task types has items that are calibrated for high, intermediate, and low proficiency levels.

The difficulty level of the tasks that test takers receive is conditional on their estimated ability in the CAT portion of the test. All of these task types require the test taker to speak for an extended time period and to leverage different aspects of their organizational knowledge (e.g., grammar, vocabulary, text structure) and functional elements of their pragmatic language knowledge.

The extended writing tasks are measures of the test takers writing English abilities. Test takers respond to four writing prompts that require extended responses: three picture description tasks and one independent task with a written prompt. Similar to the speaking tasks, these are drawn from different levels of difficulty conditional on the estimated ability level of the test taker. The stimuli in the picture description tasks were selected by people with graduate-level degrees in applied linguistics. They are designed to give test takers the opportunity to display their full range of written language abilities. The independent tasks require test takers to describe, recount, or make an argument; these require the test takers to demonstrate more discursive knowledge of writing in addition to language knowledge.

All test items are scored automatically via statistical procedures developed specifically for each format. For example, the yes/no vocabulary format is traditionally scored using the sensitivity index d′: a measure of separation between signal (word) and noise (pseudo-word) distributions from signal detection theory.

However, traditional yes/no tests assume that all stimuli are given at once, which is not the case in Duolingo English Test’s adaptive variant. This index, d′, is easily computed for fewer stimuli, and it has a probabilistic interpretation under receiver-operator characteristics (ROC) analysis. That is, d′ is calculated for each test taker by item response and converted it to a score gi, which can be interpreted as “the test taker can accurately discriminate between English
words and pseudo-words at this score/difficulty level with probability gi,” where gi 2 [0; 1]. Similarly, the responses to the dictation elicited imitation, and c-test tasks are aligned against an expected reference text, and similarities and differences in the alignment are evaluated. The output of the comparison is used in a (binary) logistic regression model to provide its probabilistic score gi.

The speaking and writing scoring systems evaluate each task based on the features listed below.

Students can take the free practice test on the Duolingo website and see if it’s the right test for them.

Students can contact me for online training, Duolingo questions material. Contact me at gauravsaini24@hotmail.com for admission with this test. You can also call/WhatsApp me on +917508676970 for more information.